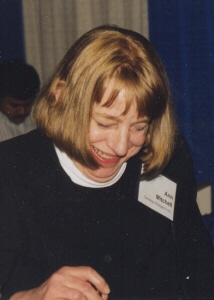 Dr. Ann Mitchell died unexpectedly Thursday, July 15, 1999 from complications associated with anesthesia at the UNC hospital in Chapel Hill. Ann was a long-time EMGS member and EMGS Treasurer from 1977-1983. She was a founding member of the Genetic and Environmental Toxicology Association of Northern California (GETA) in 1979 as well as a member of the Genotoxicity and Environmental Mutagen Society (GEMS) who served on the GEMS Board of Directors (1991-94). Ann earned her PhD in cell biology from the University of Texas, and earned national and international acclaim for her genetic toxicology work using the mouse lymphoma, unscheduled DNA synthesis (UDS) and cytogenetic assays. She was the founder and President of Genesys Research Incorporated. Ann was a highly valued and respected member of the EMGS and GEMS and will be greatly missed. The GEMS Young Investigator Travel Award presented at the 1999 GEMS Annual Fall Meeting was given in honor of Dr. Ann Mitchell.

Contributions in her memory may be donated to the EMGS Ann Mitchell Memorial Fund. You may include your contribution with your annual EMGS membership renewal form, or send it to the EMGS Business Office.