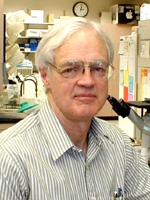 Our esteemed colleague, John Hays, Professor of Environmental and Molecular Toxicology at Oregon State University, passed away at age 76 in Corvallis. John was a lifelong nonsmoker and avid sportsman, but in a cynical twist of fate, he learned only a year ago that he was afflicted with stage 4 lung adenocarcinoma. He was not only an imaginative and rigorous research scientist, but also a very warm, open and compassionate human being.

John graduated in 1954 from Monrovia High School. He turned down a scholarship to Stanford University to spend two years at Deep Springs, a unique college on a ranch near Bishop, California, where he was trained in the liberal arts; while milking cows, riding horses to round up cattle and participating in student government. After completing a major in Chemistry and Mathematics at the University of New Mexico, John served three years in the US Navy. He then carried out graduate studies at the University of California, San Diego, for a doctorate in Physical Chemistry in 1967, before taking a postdoc at Johns Hopkins University. John joined the faculty at the University of Maryland, rising through the academic ranks from Assistant Professor to Professor of Chemistry in 1982. He fulfilled his long-term desire to return to the West in 1987, to assume the Chairmanship of the Department of Agricultural Chemistry (Now, Environmental and Molecular Toxicology) at Oregon State University. John’s early research on lactose metabolism in gram-positive bacteria shifted abruptly to recombination in phage lambda, specifically on the role of DNA lesions in the induction of recombination. His move to Corvallis also engendered a shift toward research on DNA repair and mutagenesis in a variety of eukaryotic models including Xenopus laevis, mammalian cells and Arabidopsis thaliana. John is particularly well known for his elegant series of studies on the coupling between recognition of base mispairing and excision in the DNA mismatch repair pathway in mammalian cells.

John Hays was an invited speaker and session chair for many scientific conferences, particularly Gordon Conferences, in which he was appreciated as one of the most articulate discussants. He Chaired the 2008 Gordon Conference on DNA damage, Mutation and Cancer in Ventura, California; a memorial tribute in his honor will be offered at the March 2014 Conference in that series.

John was elected Fellow of the American Association for Advancement of Science in 2001. He also leaves his mark in higher education, having trained many students and serving as one of the founding fathers of the BioResource Research (BRR) program at Oregon State University. We will treasure our memories of the collegial times we shared with John as well as many lively and intense scientific discussions. In recognition of his achievements as a scientist and teacher, the Department of Environmental and Molecular Toxicology has established the John and Judy Hays Scholarship Fund for Undergraduate Research Training. Contributions to this fund should be made payable to the .Agricultural Research Foundation. at 1600 SW Western Blvd., Ste. 320, Corvallis, OR 97333.