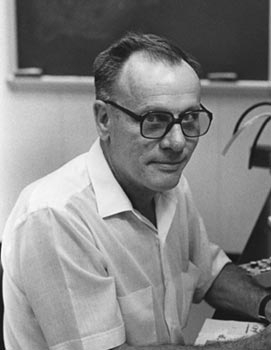 Philip Emile Hartman, a pioneer in microbial genetics and mutagenesis and professor emeritus of biology at Johns Hopkins University’s Krieger School of Arts and Sciences, died of cancer on May 4, 2003 at the age of 76. It was Dr. Hartman’s meticulous isolation of thousands of histidine mutants and his careful cataloguing and genetic characterization of these mutants that helped pave the way for the development of the Salmonella/Ames test, an assay that is used in the laboratories of academe, industry, and government for the screening of potential carcinogens.

After serving in World War II, Phil Hartman matriculated at the University of Pennsylvania, receiving his PhD in 1953. He then moved to Cold Spring Harbor to work with the late Milislav Demerec as a National Cancer Institute and an American Cancer Society Fellow. These were important times for him. There, he married Zlata, Dr. Demerec’s daughter, who became his lifetime collaborator both in and outside the laboratory. There, too, he began his work on Salmonella genetics in earnest.

He joined Johns Hopkins University in 1957 where he conducted his seminal work on the elucidation and regulation of the histidine operon. Phil Hartman made his presence known; he became Professor of Biology in 1965, and, in 1975, he was named William D. Gill Professor of Biology. He published over 200 scientific manuscripts in his career, and Gene Action, a book coauthored by Phil Hartman and Sigmund Suskind, served as the classic college level teaching text for a generation of budding geneticists.

Those fortunate enough to have been a histidinologist will remember annual his operon meetings bringing together the Hartman, Ames, Goldberger, Martin, DeLorenzo, and Blasi laboratories to truly share the latest findings and data. Spearheaded by Phil Hartman and Bruce Ames, these meetings were usually held in the Baltimore/Washington DC area, except for the last one in 1973 which was held in Capri, Italy. The approach to science instilled by Phil Hartman, marked by teamwork and camaraderie, has been a lifelong lesson. A student of Phil’s, my histidine techniques notebook, a tome crafted and shared by all of the histidine researchers, still sits prominently on a bookshelf in my office as a reminder of how science should be done.

Philip Hartman received the EMGS Award in 1985 “in recognition of outstanding research contributions in the area of environmental mutagenesis”. To many inside EMGS, Phil Hartman will be remembered for his seminal papers that led to the development of the Ames test and for his provocative reviews appearing in the Society’s Journal. These, however, are only part of his many contributions to the scientific community at large. His systematic approach to microbial nomenclature remains the standard among the Science Editors to this day, and his unselfish efforts to continue the annotation of the Salmonella linkage map (long before the advent of personal computers and extensive search capabilities) speak to Dr. Hartman’s commitment to science. Further testament of the breadth and clarity of Phil Hartman’s thinking were his fruitful collaborations on the bacterial sugar transport PTS system, the mechanisms of bacterial suppression; hyperplasia, and mechanisms underlying the action of mutagens/antimutagens and carcinogens/anticarcinogens.

Phil Hartman carried his concerns for the environment and humanity outside the laboratory as well. His tireless efforts to increase enrollment of minorities at Johns Hopkins and his dedication to the Johns Hopkins Tutorial Program, a community outreach education enrichment program for Baltimore City youths, are but two examples of his beliefs in a quality education for all. Consistent with his belief in excellence and truth in the classroom, he was one of the original signers of ‘A Statement Affirming Evolution as a Principle of Science’ in 1977. Phil Hartman was also passionate in his love of the environment. He was one of the founding fathers of Maryland’s Assateague Coastal Trust, a cause dedicated to the preservation of Assateague Island, and he also served on the Maryland Conservation Council. And, many Hopkins students will remember the ‘Hartman score card’ posted prominently in the Biology Department revealing the voting records of all US senators and representatives regarding their stances on the environment, education, war, and weapons issues.

Phil Hartman was a true mentor. He opened his laboratory and his notebooks and freely discussed his ideas, views, and experiments with all who were interested. We, the many high school, undergraduate, graduate students and postdoctoral fellows who passed through his laboratory and the many collaborators who shared his passion, always knew how lucky we were to have had Phil’s help, insight, and support along the way.

Personally, I had the good fortune of knowing Dr. Philip E. Hartman for 35 years. Over that time, Phil Hartman was my teacher, mentor, collaborator, colleague, and friend. Of all the appellations, however, I felt most privileged to be able to have called him friend. Philip Hartman was a unique and wonderful person, and, like his family and the many whose lives he touched, I shall miss him.

(Thanks to Mike Salamone for providing these historical photos from the EMGS archives.)