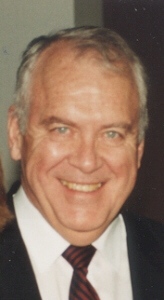 Robert (Bob) Hall Haynes O.C., B.Sc., PhD, D.Sc., F.R.S.C. died December 22, 1998 from an apparent heart attack. Among his many colleagues in the field of environmental mutagenesis, Bob was best known for his pioneering contributions to the study of DNA repair, and the development of novel mathematical approaches to analyze dose-response relations for the induction of mutation and recombination. However, his scholarly contributions extended well beyond experimental research, and he was one of a select group of scientists who explored the more far-reaching and philosophical implications of the science in which they were engaged.

Bob Haynes was President of the International Association of Environmental Mutagen Societies (1989-93) and he also served as an EMGS Councilor (1978-81, 1985-88). He served on the National Research Council Committee on Radiobiology of the U.S. National Academy of Sciences (1963-73), the editorial board of Environmental and Molecular Mutagenesis (1979-85) as well as 15 other journals, and the International Commission for Protection against Environmental Mutagens and Carcinogens (1987-92). He was President of the 16th International Congress of Genetics in Toronto in 1988, the largest congress ever held in the history of genetics research. Bob's many achievements were recognized through a number of honors and prestigious awards. These include the Queen Elizabeth II Silver Jubilee Medal (1977), the EMGS Award (1984), and the Flavelle Medal of the Royal Society of Canada. In 1990, he received the Order of Canada, the highest civilian honor bestowed by the Government of Canada. In the year before his death Bob served as President of the Royal Society of Canada.

Far beyond his numerous scientific and intellectual accomplishments, it was Bob's buoyant, outgoing personality, as pronounced by his hearty laugh and Epicurean philosophy and lifestyle that immediately comes to mind when one thinks of Bob Haynes. Another aspect of Bob's character that contributed to his stature in science and as a person was his generosity. He selflessly gave his support to his colleagues, including graduate and postdoctoral students, and notably to dedicated scientists in countries where such support had been very limited. Bob's professional generosity was a wonderful example to all. Those who knew him personally are fortunate to have been enriched by his insights and through his sincere friendship. His loss is deeply felt by the many people, worldwide, whose careers he influenced and whose lives he touched.

If you have any photos you would like to contribute to this page, please send them to the EMGS Webmaster. (Thanks to Mike Salamone for providing these historical photos from the EMGS archives.)