I was saddened by the news that my respected and greatly admired colleague Tony Carrano had passed away. I think he and I are about the same age. Although we never worked together directly, we always kept up with the progress of each other's work and I admired Tony especially when he took over the division leadership at LLNL after Mort Mendelson left on sabbatical.

I don't remember when I first met Tony but it must have been in the early or mid-seventies. When I was a postdoc with Sam Epstein at the Children's Cancer Research Foundation in 1970 and 1971, I attended all the early EMGS Meetings and collaborated with Grant Brewen, Warren Nichols and John Heddle. We were all young and enthusiastic cytogeneticists involved in the development of methods for mutagenicity testing of chemicals. In 1976, I spent half a year in Oak Ridge working with Grant Brewen and Julian Preston on the induction of chromosomal aberrations in female mouse oocytes by ionizing radiation. Grant Brewen and Tony knew each other quite well. I remember being at a meeting in San Francisco (I'm not sure which year), when all cytogeneticists joined in the bar and I think Grant introduced me to Tony then.

It was in Tokyo at the ICEM Meeting in 1981 when I found out that Tony was a fantastic dancer. After the Mutation Research Editorial Dinner, a bunch of us—I remember Tony, Julian Preston, David Scott from the UK, Gösta Zetterberg from Sweden, my colleague Angelika Neuhäuser-Klaus and I—went to a bar for a night cap. There was dancing but the men in our company were so involved in their scientific discussions that someone from another table asked me to dance. The next one to take me on to the dancing floor was Tony. What a difference, he was a wonderful dancer—I never forgot! And years later, when Tony came to visit in Munich at the GSF-National Research Center— upon an invitation by Udo Ehling—I was determined to arrange a night out in town to have another opportunity to dance with him. My friends Helga and Heinz Gonda, Tony and I set out, after dinner at my house, for a dancing tour in the nightclubs of Munich. But we were so inexperienced that we did not know where to go for ballroom dancing. We went from one club to another, but either they were too crowded, didn't have the right music or we didn't get in. Finally, we ended up in the ski bar of the Munich Hilton and found nice ballroom music, only a small group of people and a pleasant atmosphere. We danced, had drinks and enjoyed ourselves well into the early morning hours. When the music stopped, we asked for our cheques and we were told that we were guests; it turned out that we had joined a private wedding party. That night, Tony told me that he regularly practiced ball room dancing with his wife. Unfortunately, I never got another chance to dance with Tony. I treasure these great memories.

Tony Carrano's name was a highly respected one in the cytogenetics world when I came from Scotland to Shelly Wolff's lab at UCSF as a postdoc, in 1977. One of my best memories of those post-doc days was the day Tony invited some of us from the RadLab including myself and a visitor from then Soviet Armenia, Rouben Arutunyan, to visit the lab at Livermore. I had never visited a major atomic research lab or weapons lab before, and having to take my passport, and the armed guard needed because of Rouben, added a frisson of excitement. It was exciting to see around there and learn more about the flow cytometry, and Tony was an enthusiastic guide- I learned a lot. But the other delightful thing was that Tony and Liz invited us to their home where we had an idyllic time in the sunshine by the pool and I had my first quesadillas.

This was my introduction to the life in California I wasn't sure really existed- eating by the pool! It was typical of Tony the generous host and I enjoyed meeting Liz and their two young sons. I became involved in the Environmental Mutagenesis and Genomics Society from 1979 on, and saw Tony in action as an energetic and creative Treasurer who really saved the Society from bankruptcy. It was a tremendous gift to the Society that after all the hard work he put in as Treasurer for three years he then agreed to run for President, and I admired, and tried to learn from, his style of sure-handed, good natured leadership. "How shall we handle this?" he'd say. Then: "Here's what I think we should do....." and he'd put forward a sensible and practical plan where he'd clearly thought things out and helped set the direction, but still included others in the process and gave them a chance to contribute.

Tony's combination of being able to be firm but at the same time inclusive and humorous was rare and very effective. He enlisted people with his enthusiasm and like him we rolled up our sleeves and worked hard. Truly a fine leader. When I followed him as President-elect and then President he gave me the right amount of guidance, pointing out the key things I'd have to deal with and making sure I knew how early the planning had to happen for a seemingly distant meeting, and then leaving me to run things my own way. He also gave me encouragement and I'll never forget, after the annual EMGS meeting I organized was all over, Tony saying "The program was great; you should feel good about yourself". Coming from him, that was one of the best moments of positive reinforcement in my life!

Through the years I knew him Tony's scientific expertise was broadening and expanding at a great rate from his origins in radiation biology and cytogenetics to the new world of genomics, and it was another great learning experience for me when Tony included me in the advisory board for the Biology division at Lawrence Livermore labs. The wide range of projects and the enthusiasm of the scientists were impressive, and once again Tony's leadership was evident, along with his gift for hospitality. The days of science were followed by evenings looking out on the lovely hills and enjoying California wine. So although I never got to work in the same lab, Tony was a big influence on me as I suspect he was on a great many others. He was somehow there in the background as someone I knew I could turn to for support. I miss him. 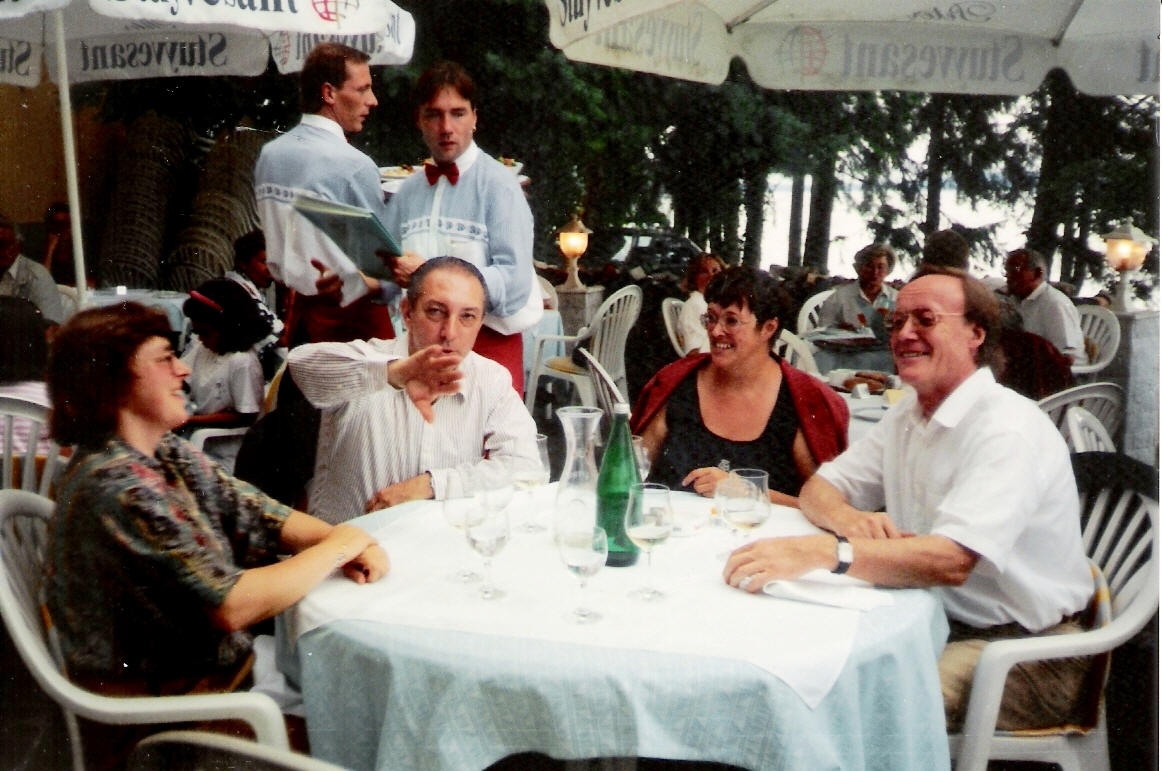 (Thanks to Mike Salamone for providing these historical photos from the EMGS archives.)